Now something about those overalls that every single student seems to own in a Finnish university. They are the greatest indicator of one’s studies, faculty and school.

It is also common to exchange a leg with one’s partner.

In the Faculty of Social Sciences, the colour of the overalls is red.

The overalls are worn to all major events, for example to Vappu or appros.

Unlike in other faculties or majors, the overalls are not usually worn to sitsit or sillis. However, there’s no actual code for this and everybody can use their overalls the way they want. 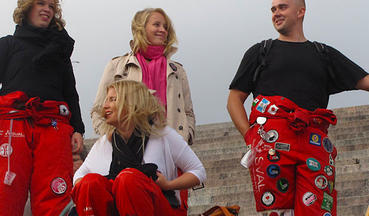 It’s also traditional that older students wear the overalls during the autumn events even if they are not tutors.

When can I get my overall?